Email to a Friend
Be the first to review this product
Availability: In stock
$2,750.00

Double click on above image to view full picture

Posted by Passive Component at 7:25 AM No comments:

This new report from Paumanok Publications, Inc. covers the global market for carbon and hybrid supercapacitors with forecasts to 2018. The report addresses global supercapacitor demand by configuration (coin cell, radial, flatpack/SMD; screw terminal, snap-mount and module assembly); global value of supercapacitor demand by end-use market segment in transportation, consumer AV, renewable energy, professional electronics and infrastructure markets worldwide. The value of demand is also estimated based upon circuit application (Memory protection, energy recoup, actuated power and UPS system). Global consumption is estimated by world region in Asia-Pacific, Europe and the Americas, and supercapacitor point of sale analysis is also given for Japan, USA, China, Korea, Europe and Israel. Supercapacitor costs to produce are addressed, as are the corresponding markets for carbon materials, cans/sleeves, electrolytes, end seals, separator materials, electrode tab materials and lugs and lead wires. A competitive analysis is also given that addresses the activities of 40 companies in supercapacitors globally and offers complete assessment of worldwide sales and market shares. Forecasts are given based upon the value of consumption by supercapacitor type to 2018, the volume of small can and large can cell consumption to 2018, and the average unit selling prices for small can and large can supercapacitor cell consumption to 2018. Forecasts are also given for supercapacitors based upon consumption by world region and end-use market segment to 2018. Price: $1500.00 USD, Pages 71, Tables 28, ISBN #:0-929717-60-0 (2013) Published May 20, 2013.

Double click on above image to view full picture

Posted by Passive Component at 7:24 AM No comments:

This new market research study from Paumanok Publications, Inc. offers visibility to a granular level on the supply chain for anode and cathode foils to the aluminum electrolytic capacitor industry. The study shows the value and volume of demand for thin gage foil consumed in the capacitor industry, as well as the value and volume of etched and formed anode and cathode foils consumed in the aluminum electrolytic capacitor industry. The study breaks down the complex merchant and captive markets for capacitor foils and shows which capacitor manufacturers etch and form their own foils; and which third party companies are active in supplying ready to use etched anode and cathode foils to the global capacitor industry. The study shows the historical growth in the market over the past decade and shows trends in pricing for capacitor grade anode and cathode foils. The study shows a detailed break-down of the costs to produce aluminum electrolytic capacitors by type and configuration and illustrates the value of foil consumption in radial leaded, vertical chip, snap mount, screw terminal, solid polymer aluminum chip, motor start and axial leaded aluminum electrolytic capacitors. Global market shares for thin foil suppliers to the capacitor industry are given; as well as market shares for thin foil supply of 99.8% cathode foils and 99.9% anode foils. Forecasts in terms of value, volume and pricing for capacitor foils is given from 2013 to 2018 as well as end-market drivers in consumer audio and video imaging; computer and peripheral; power supplies, renewable energy, automotive, telecom power, and specialty markets are addressed. Forecasts are given for capacitor foil consumption by capacitor configuration to 2018. 98 Pages, Published March 1, 2013; $2,750.00 USD.
Posted by Passive Component at 7:23 AM No comments:

To View Table of Contents and Sample Pages
Posted by Passive Component at 6:26 AM No comments: 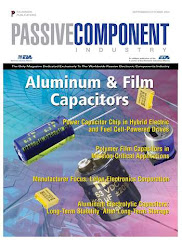 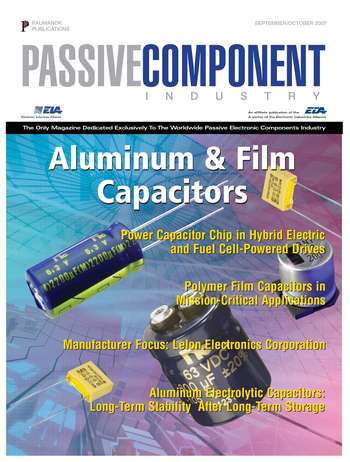